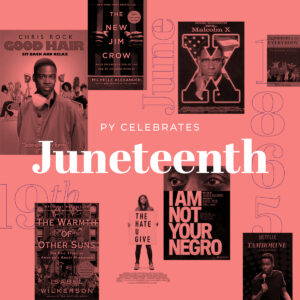 Juneteenth is a celebration commemorating the official end of slavery, when Union army general Gordon Granger announced federal orders proclaiming that all slaves in Texas were now free, in the city of Galveston, Texas, on June 19, 1865. This order came a full two years after the signing of the Emancipation Proclamation, and is recognized as the official end of slavery.

Our team is taking this day to educate ourselves about Black experiences. Our Friday night plans? Consuming media authored by Black creators. Here’s what we’ve chosen:

Good Hair, a documentary produced and narrated by Chris Rock, was created as a response to his daughter, who at age three came to him crying and asking why she didn’t have “good hair.” The picture offers a detailed dive into the stigmas associated with textured hair, and the styles and processes Black individuals have been forced to adopt.

I Am Not Your Negro, a documentary directed by Raoul Peck and narrated by Samuel L. Jackson, explores the history of racism and the Civil Rights Movement through the lens of an unfinished manuscript by James Baldwin. In the text, Baldwin reminisces about his personal experiences with Malcolm X, Medgar Evers, and Martin Luther King, Jr., as well as sharing his own perspectives.

Tamborine is Chris Rock’s 2018 standup special, exclusively available on Netflix. In his first special in ten years, Chris Rock discusses political issues and pointed observations in his trademark style, while also reminiscing on his own experiences and mistakes as a young Black comic trying to launch his career.

Feminism is for Everybody: Passionate Politics, authored by Gloria Jean Watkins under her penname bell hooks, discusses the importance of truly intersectional feminism. She urges that true women’s liberation only comes through the outright rejection of patriarchal, racist, and homophobic culture.

MOVIES BASED ON BOOKS

The Hate U Give, directed by George Tillman Jr. and based on a novel by Angie Thomas, follows the story of a 16-year-old girl who witnesses a police shooting. After this, she struggles with the disparities in her daily life at home and at her largely white private school.

Watch the Movie | Read the Book

Malcolm X, a 1992 film written, produced, and directed by Spike Lee and starring Denzel Washington, is a biopic of the revolutionary Civil Rights leader based on The Autobiography of Malcom X, which was started just before his death and finished by Alex Haley.

Watch the Movie | Read the Book