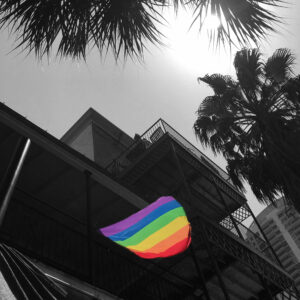 It’s normal to see crowds gathering in the streets in June. In years past, crowds here fly rainbow flags, play music, dance, and embrace as June is Pride month. However, this year, a global pandemic had different ideas about how we’d celebrate Pride. Large gatherings and parades were impossible.

However, despite COVID-19’s best efforts, there were gatherings in June 2020—they just looked very different than what we’ve gotten used to seeing. The protests sparked by the killing of George Floyd are the result of systems of oppression that impact America’s Black and POC communities. These same systems have, for just as long, marginalized our country’s LGBTQ communities.

Black experiences and Queer experiences in America aren’t identical, but the lines of these histories aren’t parallel. They intersect often, twisting together to form the helix of pain, of oppression, and of outcry that makes up our country’s highly flawed DNA. The hearts of these communities beat at the same broken rhythm.

Historically, Pride is a celebration of the fact that we’re here, we’re active in our community, and we’re invested in making it better by any means necessary. Pride looks different this year—between protests and social distancing protocols, parades aren’t exactly possible. It’s important that this year, we remember Pride started as a protest of police injustice, and it was led by Trans Women of Color. The protests, fundraisers, petitions, and proposed ballot measures this month are fully in the spirit of Pride—we’re here, and we won’t stand for discrimination and oppression.

Today is the five year anniversary of the Supreme Court decision on Obergefell v. Hodges, the landmark decision that effectively legalized same-sex marriage on the national scale. A lot has happened in the last five years, most of it positive, much of it heartwrenching.

The issues that face the LGBTQ community weren’t resolved when gay marriage was legalized nationally. It was not until this month that the Supreme Court issued a decision that protections in the Civil Rights Act of 1964 finally extends to LGBTQ employees, especially trans employees. Despite one step forward, just a few days before that decision, the Department of Health & Human Services repealed nondiscrimination protections in healthcare—part of a larger push to remove transgender individuals from “sex discrimination” protections.

In St. Pete, we’re home to one of the largest Pride celebrations in the country. Local businesses of all sizes rally together to make Pride a special event that brings our whole city together. Pride hasn’t always been sponsored by large corporations and embraced with open arms—historically, Pride began as a protest.

Without protests, we wouldn’t have legalized same-sex or interracial marriages. We wouldn’t have nondiscrimination rules at work and in school that protect women, POC, religious affiliations—and now, officially, LGBTQ+ individuals.

If we want to really get down to it, we wouldn’t have a country if protestors hadn’t sent a list of demands to an unjust government back in 1776. Among those demands: “…Governments are instituted among Men, deriving their just powers from the consent of the governed, That whenever any Form of Government becomes destructive of these ends, it is the Right of the People to alter or to abolish it.”

It is our duty to protest laws and systems we deem unjust. In order to alter or abolish laws and forms of government we disagree with, we need to make that disagreement known. That often begins with a protest, but can’t stop there—genuine change starts with outcry, and ends in regulatory updates with systemic impact. Those systems don’t stop with government and the legal system, and extend to the economic systems and mass media we interact with daily.

As a society, we’re constantly surrounded by marketing and advertising. Often, it’s hard for marginalized populations to find themselves represented in that marketing—making it difficult to know whether a brand genuinely aligns to their culture, values, and beliefs.

We’re starting to see more representation in media across the board—not only advertising, but also movies, television, and books. These are strides in the right direction, but the way we’re showcasing diversity is often underwhelming or empty. A recent study found that while 64% of all adults think it’s positive for the LGBTQ+ community to be visible in advertisements, an overwhelming 72% of the LGBTQ+ community think the way they are currently represented in advertising is tokenistic and inauthentic.

As agencies, we need to hold our clients responsible to authentically represent intersectional diversity in their marketing and to pair their public-facing image with action to improve authenticity—we happily design graphics and collateral covered in rainbows, but how frequently do we make sure that our clients are backing their Pride month marketing efforts with action in the form of a donation, initiative, or an internal policy change?

One example of a brand doing this well is Subaru. Since the 1990s, they’ve included Queer representation in their marketing, with cheeky, outdoorsy taglines and nods to Queer in-jokes in their photography. They took their representation from subtle to overt by hiring openly Gay tennis player Maria Navratilova as a spokesperson in 2000. Despite the outcry from more conservative consumers, Subaru continued the ads, and went on to sponsor Pride parades around the country for decades.

More recently, Thinx made subtle changes to their brand identity that went a long way for inclusivity. They’re a Millennial brand through-and-through, featuring on-trend colors, witty copy, and Insta-worthy photos. In 2013, they launched their flagship “period panties” with the slogan “for women with periods.” Shortly thereafter, they updated the slogan to “for people with periods,” and have since hired trans and non-binary models for their products, as well as alongside women of all shapes, sizes, and colors. In addition to these changes in the brand, they lead charitable efforts to back their inclusivity, championing causes including equity in reproductive health, inclusive sex education programs, and reliable access to menstrual hygiene products for all.

Other brands are getting on board, bit by bit—Calvin Klein just posted a billboard featuring transqueer model Jari Jones. Last summer, Victoria’s Secret hired their first openly trans angel, Valentina Sampaio. Nonbinary models are gracing runways left and right. The goal is to get intersectional representation to a point where it’s no longer newsworthy—it should be the norm.

The message from this June is about more than rainbow logos and black squares on Instagram—it’s about taking action to call for change that repairs systemic oppression. As we consider how to respond to Pride month and and Black Lives Matter in our own feeds and on behalf of our clients, we need to take that energy forward for the days, months, and years to come.

Strength & boldness, in all things

As a member of the Queer community, it can start to feel like for every step forward, we take two backward and a few side-to-side just to keep things interesting. I say this as a bisexual woman—I’m also white, cisgender, college educated, and employed, giving me social privilege compared to those who aren’t part of those groups. My Queerness is not in any way reduced by the privilege I’ve experienced—rather, it makes me even more responsible for using that privilege effectively, and to remember how far we’ve come in addition to how much work is left to do.

One of the things I love about working where I do is that we have a zero-tolerance policy for assholes—racists, sexists, and homophobes make the top of the A list. Strength and boldness are our core values, and they’re more than just words—they are responsibilities to advocate for what’s right, be unafraid to use our voice, and constantly strive for excellence.

It is our collective responsibility—those of us in the LGBTQ+ community, those of us with the power to ensure equitable representation in advertising, those of us with the ability to make policy change, and just as decent human beings—to educate ourselves on experiences outside of our own, understand the unique issues that impact marginalized communities, and to work toward systemic change.

We haven’t gone a year without a Pride parade. We’ve just gone back to Pride’s roots.

Let’s get to work.

Like our Creative Team Leader, Cat, shared earlier this month, we can’t simply stand by and let our platform go unused. In her blog, she shared a number of excellent actions individuals can take in affecting positive change for our Black Neighbors, and we feel these are relevant to help our LGBTQ+ community too: educate yourself, support and respect the right to protest, vote, sign petitions to eradicate hate, and support all local businesses.

If you want to help but don’t know where to start, here some organizations that support LGBTQ+ communities, especially Queer POC and equity in the Queer community: